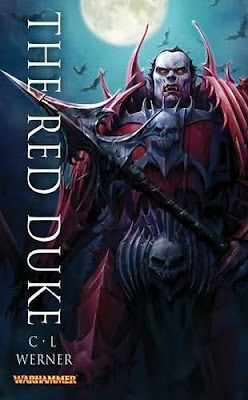 With the last of Earl Gaubert d'Elbiq's sons dead, sent to their deaths by their own father, an already existing blood feud between the d'Elbig's and the du Maisne's comes to an epic climax.

Seeking revenge for the deaths of his sons, Earl Gaubert heeds the words of one of the lowliest peasants in his court, and seeks out a witch named Jacquetta who promises to lead him to the unmarked tomb of the Red Duke. And with the help of  Renar, -- a peasant Necromancer -- instill the powers of the duke into vessel's of Earl Gaubert's choosing.

"Beware you sons of Britonnia! Beware the forces of darkness that lie in wait to tempt and trap even the strongest soul! Beware the sad end of the heroic knight, that defender of chivalry and crown! Beware, you children of Aquitaine, lest your wickedness draw down upon you the foul curse of the Red Duke!" - Jacques the Troubadour

Once known as El Syf ash-shmel, or "the North Sword," by the Arabyans, the Duke of Aquitaine cast fear into the hearts of his enemies, even before his vampiric resurrection as the Red Duke. Entombed after a bloody battle upon the Fields of Ceren, it will take everything within the Lady of the Grail's reach to help to bring the Red Duke's resurrected reign to a final and bloody end.

Werner, a veteran of the halls of the Black Library delivers a bloody brilliant approach to vampires, Warhammer Fantasy style. Now, granted I haven't read too much of Warhammer Fantasy, but what I have read I've liked for the most part. More specifically the vastness of the world building. After finishing The Red Duke, I've come to the conclusion that Werner knows his stuff. I wouldn't be surprised if the man lives and breathes the source material. And this shows more than anything in the thoughtful layout of the novel.

Beginning with each chapter and speckled throughout The Red Duke, are flashbacks to 500 years before the Earl of Aquitaine's entombment, giving the reader the rich history and backstory needed without the endless, mind-numbing, drool-fest infodumps that seem to be so crippling to most speculative fiction novels. Although each flashback isn't as long as the chapters they reside in, Werner finds a way to include just enough information into them without giving the whole story away.

"Everything a man loves dies. Everything he values must turn to dust. It is only the things inside a man that he can keep with him always. Things like loyalty and honour." - The Red Duke

With most shared worlds it is to be expected that there's not much character development to be read and cultivated within the characters that populate the stories. The Red Duke is not one of those novels. Instead, as the backstory of the Duke is unveiled, the reader slowly begins to see not only the title character grow, but also a large handful of the main cast and secondary characters. No doubt it's a refreshing feel.

But not everything is refreshing. As the story unfolds almost poetically in spots, I can't help but think that the plot of the story is kind of overdone and cliched: an evil from centuries past has been resurrected to exact vengeance on the heads of those who most deserve it. Along the way, said ancient evil being manages to somehow amass a large following of supporters and soldiers willing to die with a single command. It's not that it's overly used in fiction, but in movies as well. Although it does manage to work rather well with this story, I would have much preferred it to be more refreshing.

If that doesn't bother readers, though, the ending might. For those that like closure and a succinct tying of loose ends, The Red Duke might disappoint. But, if you're looking for a story that carries well, and is richer than most when it comes to shared world literature, then look no further.