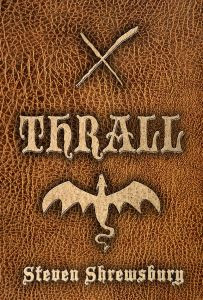 Ever found a book where it seems no matter what happens you just never have enough money, or time to buy or read it? Thrall was one of those books for me. It wasn't until Context 24, a small convention held in Columbus, Ohio each year, that I had the opportunity to grab a copy. Through conversations with the awesome Stephen Zimmer, an author notable for both his epic fantasy series and urban fantasy series both published through Seventh Star Press, I expressed my interest in Thrall, to which he responded by giving me a copy to review. To Stephen I say: thank you good sir!

With Thrall Steven Shrewsbury introduces a new hero; an aging warrior who has lived for centuries battling the monstrosities of legend and lore. Set in an age when the Nephilum walk the earth, demonic forces hunger to be unleashed, and dragons -- both living and dead -- still set claim to the skies. His name is Gorias La Gaul, and he's on a journey to find one of his own blood, a young man who is caught in the embrace of necromancy. And on his journey Gorias' will encounter things both living and dead. Familiar enemies and new foes alike.

One of the things that I found most fascinating with the yarn that Shrewsbury has managed to weave within the pages of Thrall is the main character: Gorias La Gaul. A man near the end of his extremely long life, he has seen and done things that most have long since filed away in the annals of history. Though he is a legend and a myth on the lips of many, he is nothing more than a man to those that know him. And a flawed man at that.

For the most part I enjoyed the story of Gorias La Gaul, although I found some of the names, places, and creatures to be quiet contrived, as if Shrewsbury ripped a page out of a Dungeons and Dragons campaign. However, Shrewsbury does a fine job of executing the story, and making it believable enough to grab the readers attention.

If you're not one for novels with a large cast of characters, then Thrall might not be for you. Throughout the course of the novel the reader is introduced to many characters that share a history with La Gaul. And although Shrewsbury takes the time to fill in the reader as to how the hero of the story knows the individuals, after a while the constant feeding of information becomes tedious and lessens interest. Whether Shrewsbury meant to do this or not -- possibly setting Thrall up to be the conclusion to a longer story arc, (think David Gemmell's Druss the Legend series) -- it just didn't work for me. However, if you're a fan of tome-length tales of sword & sorcery, and are looking for something as deep and rich in world and character, but smaller in length, this might just be the novel for you!

With Thrall, Steven Shrewsbury has found a way to blend sword and sorcery, the occult, incredible monsters, and biblical beings into a tale set in antediluvian times, all the while channeling David Gemmell and Robert E. Howard. Remarkable!That's why I'm giving Thrall 7.0 out of 10 TARDISes. If you like the works of Robert E. Howard, or David Gemmell, and you're looking for a non-stop, action packed novel, then Thrall is the book for you!