A Gathering of Crows Book Review

This review has been a long time coming. I've actually read the book more than once in the past several months, since it's July 27th release date, but have found it hard to come to realize that this is the final Brian Keene novel to be released through Dorchester Publishing.

It's no secret that Keene is no longer on their list of current authors writing for them. He even made the announcement on his blog a while back. But, I thought it best to wait until things had been sorted out to write this review, that way I could inform everyone who still doesn't know, about Keene's departure. And so now that you know, without any further excuses, here's my review for Brian Keene's A Gathering of Crows:

Set in a not so unusual location: Brinkley Springs, West Virginia, a podunk town hit hard by the recent economy. But unlike most towns of it's kind, the citizens of Brinkley Springs are being hunted down, gutted, getting their souls sucked out of their skulls, and all around mutilated by a shape-shifting murder of crows. Although that would be a killer plot for any novel (if executed properly), Keene ups the anti, throwing one of his most popular characters to date into the thick of things: Levi Stolzfus, an Amish powwow weilding magus, and all around badass.

When I first heard that Levi would be a major character in A Gathering of Crows, I couldn't help but get excited. Introduced in Ghost Walk, -- the sequel to Keene's Dark Hollow -- Levi quickly became one of my favorite characters to come from Keene.

The first third of the novel takes a while to get in to, but from there on out, it picks up the pace and keeps hitting harder with every turn of the page. Including in the last third of the book: a major nod and further explanations into Keene's mythos, mainly with The Thirteen, as well as The Old Ones, and a bit of a history lesson with the lost colony of Roanoke -- which Keene deftly ties into the story -- leaving just enough unanswered for the reader to want to know more. Add in killer dialogue throughout, red-shirts that are as real as you and me, and you've got one hell of a novel.

A Gathering of Crows has hands-down become one of my favorite novels to come from Keene in recent years, easily making it in the top five mass market paperback titles. There's not much more I can say without being truly biased, and splattering spoilers all over this review, so I'll just keep it short and simple: Run to your local bookstore before Leisure pulls it, and buy a copy. Hell, buy several copies and give them to your friends. And while your at it, go ahead and pick up any other Keene books you don't have, because the way it's sounding now, there's not much time left to do so.

Just go pick the book up.

On a world not so unlike our own, strange winds begin to blow: the loathsome Azteca have stormed the Wicked High Mountains, and begun a march across Nanagada, sacrificing man, woman and child to their cruel, bloodthirsty gods as they go. Their intended target: Capitol City.

After having washed ashore 27 years earlier, John deBrun remembers nothing of his past, but as the winds of war begin to steadily blow, he's forced to remember just who he really is. deBrun -- a self made fisherman -- finds himself caught up in a fight that he doesn't really want to be a part of, until his town is invaded and sacked, and his wife and son have disappeared. Left with nothing, deBrun is forced to do the one thing he thought he'd never be forced to do again: fight. Saved by a man named Oaxyctl, the two travel as forerunners to Capitol City, where there they sound the warning against the invading Azteca.

But as the annual Carnival begins, a mystical figure arrives, questioning locals as to the where-abouts of John deBrun. The man known as Pepper has his own secret agenda, and as the story unravels, not only is the vail of Pepper's history lifted, but also deBrun's, as the two are forced to work together to save Capitol City. With only an ancient map to go by, and a name: Ma Wi Jung, deBrun leads a crew of men to the north, where they hope to find something that can save Capitol City from falling to the approaching Azteca attack.

Crystal Rain is something of a wet dream for both science fiction and fantasy lovers alike. The way Buckell deftly intertwines and blends the two genres together is breathtaking. Add in a heaping dose of the Caribbean, with a pinch of of seige warfare, and you've got the perfect main course.

Buckell does a fine job with keeping each chapter as short as possible, without sacrificing quaility. In most places it reads like a thriller should, and keeps info dumps to a minimum, instead placing small bits of information into strategic points of the story that do nothing but good for it. With well thought out characters and an ending that blew me away, I'm looking forward to spending more time in this unique universe that Buckell has done a superb job with introducing in Crystal Rain. That's why I'm giving it 8.5 out of 10 TARDIS's.

If you've got the spare pocket change and are looking for a good read that does a superb job of blending two major genres of the literature world together, then give Crystal Rain a chance. I promise you'll like it. 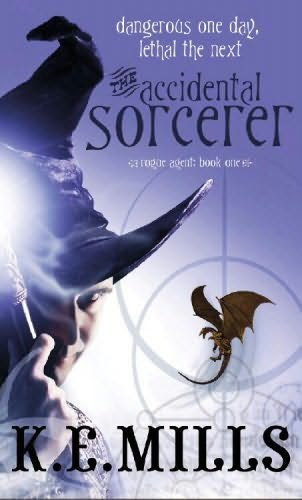 The Accidental Sorcerer is the first book in the Rogue Agent Series, written by K.E. Mills and published by Orbit Publishing.
When I first picked up The Accidental Sorcerer and began to read, I quickly realized that it read much like a mature knock-off of Harry Potter. Which, the more I continued to read, the more I wanted it to be. Sadly, it only lasted for the first one hundred or so pages. It then quickly turns into something completely different than what I thought it would. To say that this book kept me surprised until the end would be an understatement.

The Accidental Sorcerer is the story of Gerald Dunwoody, and his transformation from Third Grade Wizard to King Lionel of New Ottosland's new Court Wizard. It all starts with a bang, after Gerald blows up a factory trying to save it, working as a Third Grade Wizard inspector -- a job usually held by a Second Grade Wizard at the very least -- for one of the most famous wand makers in the country.

Out of a job, and a stain on the Ministry's reputation, Third Grade Wizard Dunwoody is distraught, until his close friend Monk Markham recommends he look in the newspaper for potential employees. To his surprise, Gerald finds an add: New Ottosland is looking for a new Court Wizard. Hired on the spot, Gerald moves into his new position as Court Wizard, and struggles to keep it together as things begin to spiral out of control all around him.

Will this new position make, or break Gerald Dunwoody? With an interesting choice of characters, K.E. Mills -- a pen name for author Karen Miller -- fills the pages of The Accidental Sorcerer with some of the most memorable characters that I've read in the last several years. Between Monk Markham, one of the most brilliant minds working for the Ministry, and one of Dunwoody's best friends; Reg, a talking bird and one of Gerald's closest friends who eximplifies the Transformer's motto: "more than meets the eye," there's enough humor to make the reader smile, even in the last half of the book.

With all writers, they have their strong points, and the weak ones. As I read I couldn't help but fall in love with the characters of The Accidental Sorcerer, but as I read on, deeper and deeper into the novel, I couldn't help but ask questions concerning the government of New Ottosland and the running of it. For me, Mills fails at developing the kingdom of New Ottosland, instead sacrificing it for further development of the characters.

At 530 pages, The Accidental Sorcerer is by no means a brick of a book, but neither is it your typical 80,000 word, 320 page novel. Mills is bordering on what I consider to be the "King Syndrome": aptly named after horror author Stephen King, who takes freakin' forever to get anywhere with his books. I think a large portion of this book could have been boiled down, or all together cut out to make a more solid and well rounded novel. I'm necessarily recommending cutting it down to 320 pages, but instead bringing it down to the 450 page range, would have helped the books in some serious ways.

In the end, I throughly enjoyed reading The Accidental Sorcerer. Mills has done what many authors out there today can't necessarily do: make me invest in the characters, and want to know what happens next. Besides a weaker ending than what I would have liked, I can't wait to see where Mills takes the reader next with the second book of the Rogue Agent Trilogy, that's why I'm giving The Accidental Sorcerer 7.5 out of 10 TARDIS's.

If you enjoy character development, without the technical infodumps and overly long explanations for everything, I would highly encourage you to pick up The Accidental Sorcerer the next time you hit your local bookstore.