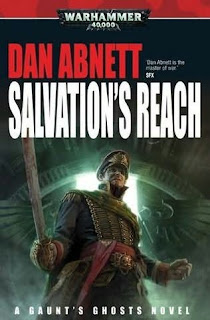 It's no surprise that Dan Abnett's Gaunt's Ghosts series is a major hit for the Warhammer 40k author. The thirteenth book in the Gaunt's Ghosts series, and the second title in The Victory story arc, Salvation's Reach is long overdue. Because of medical issues that conflicted with Mr. Abnett's writing schedule, Salvation's Reach will finally hit the shelves on October 4th. For those fans out there, here's the newest synopsis below.

The Ghosts of the Tanith First-And-Only have been away from the front line for too long. Listless, and hungry for action, they are offered a mission that perfectly suits their talents. The objective: the mysterious Savlation's Reach, a remote and impenetrable stronhold concealing secrets that could change the course of the Sabbat Worlds campaign. But the proposed raid is so hazardous, it's regarded as a suicide mission, and the Ghosts may have been in reserve for so long they've lost their edge. Haunted by spectres from the past and stalked by the Archenemy, Colonel-Commissar Gaunt and his Ghosts embark upon what could be their finest hour... or their final mission. 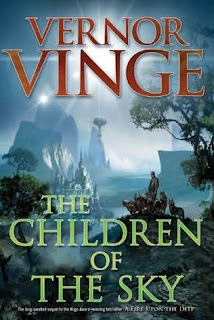 ﻿What began in 1992 with A Fire Upon the Deep, Vernor Vinge continued it's story with A Deepness in the Sky seven years later. Now, twelve years after the second book in the Zones of Thought series, Children of the Sky is finally seeing the light of day. Here's the synopsis for it:

Ten years have passed on the Tines World, where Ravna Bergnsdot and a number of human children ended up after a disaster that nearly obliterated humankind throughout the galaxy. Ravna and the pack of animals for which the planet is named have survived a war, and Ranva has saved more than one hundred children who were in cold-sleep aboard the vessel that brought them.

While there is peace among the Tines, there are those among them -- and among the humans -- who seek power... and no matter the cost, these malcontents are determined to overturn the fledgling civilization that has taken root since the humans landed. 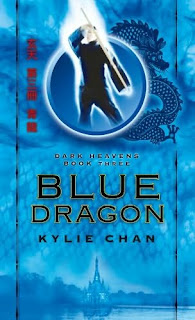 ﻿Blue Dragon is the conclusion to Kylie Chan's Dark Heavens trilogy, which started with White Tiger and continued in Red Phoenix. Although I have yet to pick up the second book in the trilogy, I'm excited to see what the third volume brings, and how Mrs. Chan manages to wrap-up the series. Below is the synopsis:

The forces of Hell are poised to strike...

When Emma's relatives come to visit her, they are totally freaked out by what they learn... Emma's beloved, John Chen, is a 3,000-year-old Chinese god. Not only that, John is becoming weaker by the day. Demons pursue him relentlessly, hoping to use Emma and his child, Simone, as bargaining tools against him.

Emma battles to defend Simone as John's energy is drained by the effort of both living in the mortal world and protecing them. While Emma is nagged by doubts about her own nature, she must find the courage to go on... 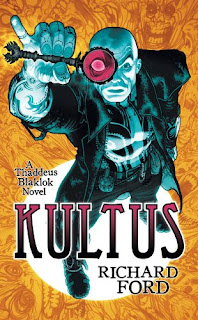 ﻿Here's a first for Updates and More: a book featured from Solaris Press!

I've been patiently looking forward to seeing what Kultus is all about. Here's the synopsis for it:

Thaddeus Blaklok -- Mercenary, demonist, bastard and thug-for-hire -- is pressed into retrieving a mysterious key for his clandestine benefactors. Little does he know that other parties seek to secure this artefact for their own nefarious ends and soon he is pursued by brutal cultists, bloodthirsty gangsters, deadly mercenaries and hell spawned monsters, all bent on stopping him by any means necessary.

In a lightning paced quest that takes him across the length and breadth of the steam fuelled city of Manufactory, Blacklok must use his wits and his own demonic powers to keep the key from those who would use it for ill, and open the gates to Hell itself.

Kultus hits shelves on October 25th, just in time to scare the hell out of you for Halloween! 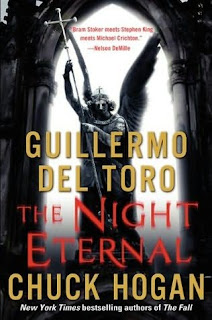 ﻿Another title that will see publication just in time for Halloween, is The Night Eternal, the third and final book in the Strain Trilogy. Written by the dynamic duo author Chuck Hogan, and filmmaker Guillermo del Toro, I'm hoping for an explosive, dramatic ending. Not only did I love the first two books, but I'm a big fan of del Toro's work. Here's the full synopsis for The Night Eternal, which also hits shelves on October 25th:

It's been two years isnce the vampiric virus was unleashed in The Strain, and the entire world now lies on the brink of annihilation. There is only night as nuclear winter blankets the land, the sun filtering through the poisoned atmosphere for two hours each day -- the perfect environment for the propagation of vampires.

There has been a mass extermination of humans, orchestrated by the Master -- and ancient vampire possessed of unparalleled pwoers -- who selects survivors based on compliance.

The future of humankind lies in the hands of a ragtag band of freedom fighters -- Dr. Eph Goodweather, Dr. Nora Martines, Vasiliy Fet, and Mr. Quinlan. It's their job to rescue Eph's son, Zack, and overturn this devastating new world order. But good and evil are malleable terms now, and the Master is most skilled at preying on the weaknesses of humans.

Now at this critical hour, there is evidence of a traitor in their midst... And only one man holds the naswer to the Master's demise, but is he one who can be trusted with the fate of the world? And who among themwill pay the ultimate sacrifice -- so that others may be saved? 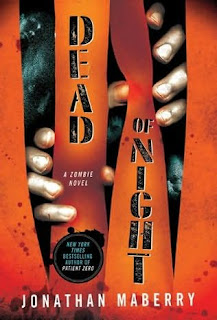 And finally, the other title to see publication just in time for Halloween, is Jonathan Mayberry's Dead of Night. It hits bookshelves on the 25th  as well. Here's the synopsis from the back of the Advanced Reader's Copy:

A prison doctor injects a condemned serial killer with a formula designed to keep his consciousness awake while his body rots. But before he can be buried the killer wakes up. Hungry. Infected. Contagious. Can two small town cops contain the plague before it spreads beyond all control?
﻿
Look for a full review of Dead of Night to be posted before the end of the month!