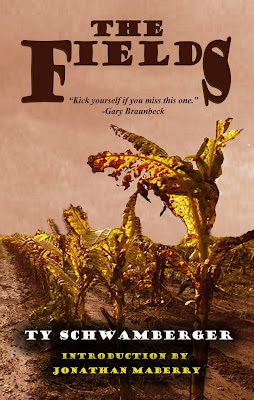 WARNING: The Fields is not your typical zombie story.

The Fields is the newest offering from author Ty Schwamberger. A novella-length tale, it feels at times as though it's telling much larger and much more significant story than its 82 pages.

With the death of his father, Billy Fletcher is left the plantation with which his family has made their living from for decades. Empty of slaves, and nothing but dead and dying fields, Billy is left with the major task of restoring the Fletcher's land to its past glory; eeking every bit out of the soil as is humanly possible for young Billy. That is, until one day, a strange, mysterious figure appears by the name of Abraham, offering to make Billy's burden much lighter.

With his choices running out, Billy makes the decision that puts him in charge of the risen slaves. But with the second life that the slaves have been given, can Billy be the master that his father never was? Can Billy manage to bring the plantation back to what it once was? And most importantly, what does the mysterious figure known only as Abraham really want?

The answers to these questions, and many others are addressed in a smart, engaging, politically thoughtful way, in The Fields.

Ty Schwamberger -- a relatively new voice in the Horror genre -- manages to do something in 82 pages that most authors can't do in the entirety of their writing careers: he makes you think. And not just in a think-while-you-read kind of way. Oh no. He'll have you questioning not only the contents of The Fields, but the politics and history that built this country.

Although the slaves of the Fletcher Plantation return as reanimated corpses with the single purpose of doing their master's bidding, the reader must look past the rotting flesh and their mundane torture; past the dying fields and the mysterious Abraham. Instead, one must look to the heart of the story. Its one part coming of age, one part reconciliation, and a hundred percent heart-wrenching.

For the horror reader looking for the typical blood and guts, bullet-to-the-head zombie story, you might want to look elsewhere. The Fields offers none of these cliches. Instead it delivers its shivers with the utmost subtliness, and the elegance of a stiletto peircing your side and cleaving the heart. That's why I'm giving The Fields by Ty Schwamberger 7.5 out of 10 TARDIS's.

If you're looking for a read different from the typical zombie norm, then look no further. Ty Schwamberger delivers!