The Time of Quarantine Review 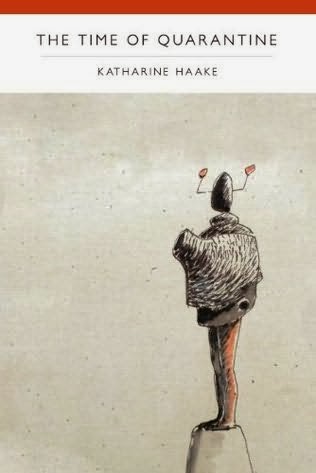 The end of the world as we know it has formed the jumping-off point for so many novels, that it's hard to believe the unknowable contains anything we haven't read countless times before. And, yet, when we're in the hands of such an impeccable story-builder as Katharine Haake, the material becomes so original, so real, that it feels improbable that any other outcome should be possible.

The Time of Quarantine follows Peter, who has spent his earlier years being raised in a California commune. The commune was set up by Peter's father to protect its inhabitants from the disease and pestilence of the outside world. After its collapse, Peter leave his 'quarantine' to explore the outside world, and finds that the truth is very different from that recounted to him by his father. Along the way, he meets a similarly cast-adrift trio of characters, and together they start probing the land, looking for any remaining traces of humanity and identity. The book is set partly in the world of technology -- the protagonists have computer chips built into their brains, and trying to tap into these and make sense of the data stored within them forms part of the plot-action -- but also touches subtly on what might be happening to the environment. Haake is clearly well-versed in environmental science, and knowing the works of serious non-fiction writers like Jay Withgott and William Cunnhingham, and the other 'stories' they can tell us about what might be happening to the world, means that the author can weave little clues into the narrative without ladling it on.

Haake's voice is a lyrical one twisting and teasing words into long sentences and paragraphs that sometimes feel as though they have been minutely measured and weighed for perfection. It's a good thing this voice is so searing, as it tends to dominate the novel. We move between several different voices. None of these feel particularly distinctive from one another -- Haake is no Faulkner. And yet, because the author is so brilliant at tapping into fears and unlocking memories that feel vibrant and personal to all of us, it's hard not to feel this book penetrating to the core. At its essence, the book is about the world itself, and how it controls and acts upon the tiny characters within it. As such, it makes perfect sense that the protagonists should, at times become indistinguishable from one another.

This isn't a flawless novel. Some of the more finely wrought passages can feel slightly overblown and readers who don't like a challenge may struggle to survive until the end. Also, some of the details remain a little vague and obscure. At time, we're not really sure what the characters are doing. This sense of dislocation might be partly intentional, and Haake clearly intends us to feel as though we, too, are lost, helplessly groping around for meaning. Answers may prove hard to come by. Scintillating prose and innovative plot, though, are here in considerable quantity.

~Claire
Posted by The Sci-Fi Guys at 4:08 PM No comments: