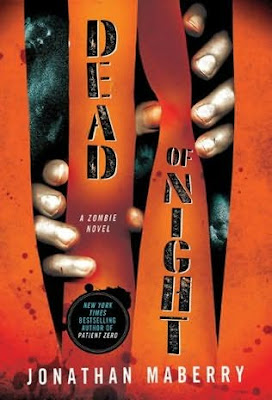 For the last few years I've been hearing nothing but great things about Jonathan Maberry and his works, specifically his Joe Ledger novels (Patient Zero, The Dragon Factory, King of Plagues), and his recent foray into young adult fiction with his Benny Imura novels (Rot & Ruin, Dust & Decay), I was more than eager to jump on the chance to review one of his stand alone novels (thanks to the kind folks at St. Martin's Griffin, and of course Janathan Maberry). Most of the time I like to read shorter fiction of new authors before I dive into some of their bigger bodies of work, but with Dead of Night, I couldn't resist.

Dead of Night tells the story of Stebbins, Pennsylvania, a small town that will soon pack a big bite. When a prison doctor injects a condemned serial killer with a formula designed to keep his consciousness awake while his body rots, it's up to cops Desdamona Fox (Dez to everybody) and her partner JT Hammond to put things right and save their small town. When they're taken in for questioning in regards to the deaths of fellow Stebbins police officers, things take a turn for the worse, and they are forced to fight even harder for their lives, and the lives of the other two thousand people who call Stebbins home.

With characters as ordinary as you and me; with faults and flaws, and lives lived as ordinary as the lives around us, it wasn't hard for me to find myself quickly becoming attached to the characters. Unlike some zombie novels that focus on the broader scope of a zombie infection-turned-plague, Dead of Night brings the setting down a few notches, and makes it more intimate, while all the more terrifying.

That's not all that Maberry does well with Dead of Night. Jonathan writes with such knowledge and love for zombies, that when I finally came to the scientific reason for the creation of the plague and the process with which it was done, I found myself fascinated. And I'm not normally one for in-depth science explanations!

But not all of the novel was great: at times I was confused as to whether Maberry was trying to be artistic, or more literary than some of his fellow authors. With the beginning of each new part there is an extract of T.S. Elliot's The Hollow Men, a poem which is referenced several times throughout the novel. Because of the purpose of the man-made plague, and reasons I won't get into for worry of spoiling the book, Maberry tries to connect the poem to the situation at hand, but unfortunately it's an attempt that felt too forced for me to try and like.

When I wasn't laughing, I was on the verge of tears; hoping against all hope that there would be a happy ending. This is a book filled with suspense and zombies... lots of zombies. Two things that just happen to mix very well! With interesting characters and an-almost-perfect plot, it's a novel that shouldn't be missed this Halloween season, that's why I'm giving Jonathan Maberry's Dead of Night 8.0 out of 10 TARDISes!