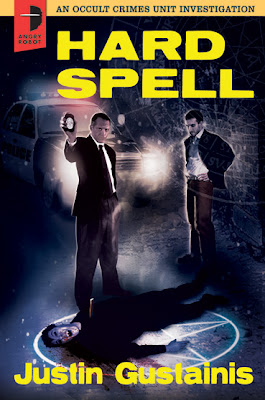 We humans are not alone. In an alternate timeline, the reader is informed that Supernaturals, or "Supes" walk among us. Since the end WWII Supes have been given the same rights as humans, whether they be goblins, werewolves, vampires, witches, ghouls, or trolls. Throw in the element of a supernatural, the knowledge and experience it would take to solve a murder involving a werewolf or vampire, and you get The Supernatural Crimes Investigations Unit.

Scranton, Pennsylvania: a hotbed for all things that go bump in the night. It's also Detective Sergeant Stanley Markowski's beat. As a member of The Supernatural Crimes Investigations Unit, or the "Supe Squad," it's up to Markowski and his partner to solve any crimes or murders involving supernaturals.

What starts as a typical night for Markowski and his partner Renfer, turns into something far worse than either of them could have ever imagined. When the two arrive on scene they realize that the victim was a Vampire. But unlike most vampires, and most cases, the victim in question has three very unfamiliar symbols carved into his body. It's these three symbols that send Markowski and Renfer racing to stop a very, very bad thing from happening.

Gustainis doesn't mess around. Within the first thirty pages of Hard Spell Gustainis does three things incredibly well: he introduces you to the main character of the novel, explains the highlights of the Supernatural's history, and the slang and terminology the reader will need to understand what's going in the book. Although there isn't too much slang used, Gustainis still makes the reader aware.

On a whim I decided to review this book. And I'm damn glad I did. In less than nine hours, and one sitting, I had devoured Hard Spell from cover to cover, including the ten page excerpt for Evil Dark, the next book in the series. To say that I loved it was an understatement.

Admittidly at first, I had my reservations about Hard Spell. After reading the synopsis on the back cover I was afraid that it would read like every episode of CSI, NCIS, Criminal Minds, or every other CSI knock-off on television today, just with a bit fangs thrown in for good measure. I'm very happy to report that I was wrong.

From page one Hard Spell builds momentum, and keeps going all the way to the end.

Hard Spell is a rip-roaring, hard hitting mystery, crime wrapped in creepy old dudes, Witchfinders, hybrid magic users, meth-head goblins and a slew of Supes that would put the average Boogie Monster to shame. Witty dialogue, interesting characters, and a universe quite different from any I've read in the Urban Fantasy genre in a long time, makes Hard Spell one hell of a book. That's why I'm giving Hard Spell 9.0 out of 10 TARDISes.


If you like reading about things that go bump in the night, and are tired of the typical werewolf or vampire trope, then I would highly picking up a copy of Hard Spell.