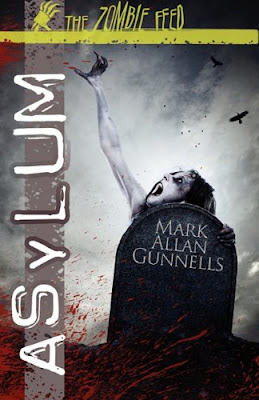 Asylum is the newest novella from Mark Allan Gunnells. The story is centered around a group of survivors waiting out a zombie apocalypse in a gay nightclub.

When Curtis is dragged to his first gay nightclub by his close friend Jimmy, he's expecting a night of drinking, dancing and sex, but it'll get worse before the morning comes. It all starts in the parking lot of nightclub Asylum, when Curtis's best friend starts going down on a fellow clubber, and zombies start attacking their car. Retreating into the nightclub, readers are almost immediately introduced to the rest of the survivors including the expected characters, as well as some others: a Vietnam vet bartender, an ostentatious gay couple, a DJ, a male stripper and a drag queen. Are they survivors, or are they zombie food?

Gunnells does a marvelous job with creating characters that could easily carry a three hundred page novel instead of a mere eighty pages. Breathing life into them, Gunnells invokes an immediate understanding in the reader that the majority of the warm bodies in Asylum are zombie munching goodness, which makes the horror more real after reading and creating a bond with the characters. These aren't just stick figures, they've actually got meat on their bones, and it shows in the end.

And all the while Gunnells is making you care for the characters, he's taking the Romero-esque zombies and using them effectively, unlike so many half-written, throw away zombie novels that seem to have littered the shelves of every major bookstore across the country.

Regardless of your sexual orientation this is one hell of a scary novella, because when it comes down to it, death isn't prejudice; it'll take what it can get. And neither should the reader. If sexual preference is the only thing keeping you from picking up Asylum, then your missing out. A damn good story is a damn good story.

And this is a damn good story. That's why I'm giving Asylum 8 out of 10 TARDISes.

With Asylum Gunnells succeeded in drawing me in almost from page one, asking for more regardless of it's page count, and leaving a gap to be filled. There's no doubt in my mind that I'll be picking up more of Gunnells other works in the future. He's definitely a talent to look for in the future.