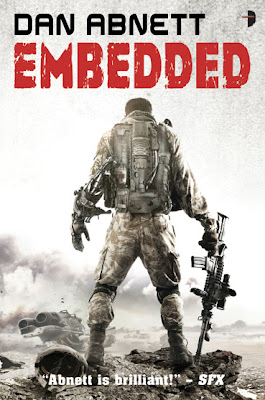 
Embedded is Abnett’s first science fiction novel outside of the Warhammer 40,000 series. I must say, I’m very, very pleased with Embedded. The beginning is a bit confusing as Abnett uses a different lingo, one that you could expect to see 300 years post Cold War. With the setting being very imitative, we find characters drinking “-effect” beers and sitting on “-effect” furniture, synthesized to imitate the real thing. New habitable planets are numbered and then named after they are colonized becoming a part of the "United Status”, and we find our story taking conflict with planet 86.

Our main character, a journalist named Lex Falk, is the best as what he does. Major Gillard even says “I can see why you came so highly recommended. Probing questions. Incisive. Agile mind. I like it.” One thing I loved about Embedded is that I felt like I was actually Falk. Drawn into the character, I became comfortable with my surroundings, my friends, and my job as a reporter. Then, unexpectedly, Abnett upsets the story line by Falk making a split-second decision to take the chance of a lifetime and “link” up with a soldier named Nestor Bloom, a 26 year old first class private in the SOMD. Before long, Lex finds himself chipped into a soldier on the front line behind Bloom’s eyes.

The action scenes come alive in Embedded with a descriptive approach and you can almost smell the scenery. The soldiers have high-tech weapons and gear and vehicles similar to ones we use today, but much more efficient and effective. One piece of gear in particular which you can see on the cover is an arm stabilizing apparatus on the left arm of the soldier, the Limb Assist Exo Frame, or LEAF, used to support a soldier’s arm in extensive combat situations. The soldiers have a color targeting heads-up-display which highlights and distinguishes between non-threats and threats. It’s futuristic equipment like these that push Embedded further into the future and add to the “science” in “science fiction”.

I had to read Embedded slowly, just around 2 to 4 chapters at a sitting. It was a lot to digest and, at times, became so much that I had to reread a few parts as I would find myself sometimes asking who or what was that? I had only read 2 other books of Abnett’s and never would have classified myself as a “fan boy”. Now that I’ve read Embedded, however, I’m begging for more! The end to Embedded (no spoilers ahead) left me feeling a little let down, as there were questions still unanswered. Does this leave room for a sequel? I don’t know. Would I read it if there was? Of course!

I give Dan Abnett’s Embedded a 9 out of 10 Mechs. With a gripping story line, intrepid characters, and crisp settings, it’s a bold book gripping you till the end. My only complaint is the slow beginning, but it works with Embedded, just something I’d not prefer. I would confidently suggest this book, and I plan to visit Abnett’s other works very soon.