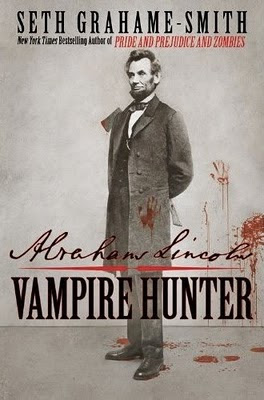 Seth Grahame-Smith takes on history and myth in Abraham Lincoln Vampire Hunter, an epistolary-style alternate history novel bringing to light what most dismiss as a conspiracy theory. The introduction begins with Smith in disbelief of what has been delivered to him. A strange man has left in Smith’s possession 10 leather-bound books, the secret diaries of Abraham Lincoln. In these, Smith discovers that Lincoln was more than he had shown to the world. A life hidden in secrecy and masked with wars and laws. Smith is asked to write a book about the diaries, and in the process, his life is left in shambles.

Smith takes Lincoln’s timeline and tells us the story we never knew and conspiracy theorists have been telling us since Lincoln’s death. We begin in Abe’s childhood and progress into the hunter lifestyle that we would have never imagined. For example, eleven year old Lincoln is told that vampires are real, and that his mother, Nancy Hanks Lincoln, was murdered by a vampire. The following year, Abe seeks vengeance and kills the vampire, his mother’s murderer, with a wooden stake. This marks the beginning of the Abraham’s secret life as a vampire hunter.

Smith takes us to many locations and battles in Abraham Lincoln Vampire Hunter, meeting new allies such as Edgar Allen Poe, and even more enemies along the way. Smith captures our imagination with Lincoln’s relationships and new found purpose in life.

He also does a wonderful job of taking everything we know about history and Abraham Lincoln and turning it on itself, destroying what we know, or believe, as truth. Every rumor and myth about “Honest Abe” gets twisted to embellish the horror premise. What about Lincoln's beard? Legends say he grew it because Grace Bedell wrote that: “women love whiskers." But in this alternate timeline, the beard was groomed to hide the scar from Lincoln's vampire-fighting life.

Smith also writes that Lincoln’s role in history as an abolitionist takes root in a much different way than we’ve been told. Lincoln and a friend travel to New Orleans to sell goods and happen to witness a slave auction. They then follow the slaves and their owner back to the owner’s plantation. There, Lincoln discovers that the buyer is a vampire, buying the slaves as food as we would buy groceries today.

Abraham Lincoln Vampire Hunter has a fair portion of detailed action scenes. I could see the human like forms of vampires in my mind snarling as Lincoln was fighting for his life and for vengeance. Relationships and tensions follow a rollercoaster pattern and at times leave you questioning who to trust and who to kill.

I give Abraham Lincoln Vampire Hunter 7 out of 10 Mechs and would recommend this to anyone who has yet to read this style or genre of literature. There’s no doubt Smith can tell us a story, even if it’s one we think we know the ending to…