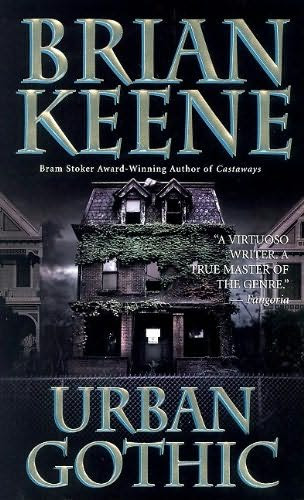 I've been a Brian Keene fan now for many years, and I have no problem with telling anyone who will listen, that he's one of my top favorite authors of all times. When someone asks me to recommend a book, my tops picks are usually Brian Keene's The Conqueror Worms (which is my all-time favorite novel), Ghoul, Dead Sea, or Dark Hollow. But now, it would seem, there's another contender to add to that list.

After a night out in Philly, six friends get stuck in a dangerous neighborhood in the inner city when they're car breaks down. Seeking shelter, they decide to enter a run down, abandoned row house. Little do they know that it's anything but abandoned; it's residents still live there, deep in the basement of the desolate house, nocturnal and hungry for flesh.

This book, should come with a warning.

Imagine if you will: The Goonies on a combination of steroids, except there isn't any treasure, and One-Eyed Willie isn't dead, and neither are his friends. But what they are is pissed off and hungry. If Brian Keene's novel Castaways was a homage to Horror author Richard Laymon, then there isn't a doubt in my mind that Urban Gothic is Keene's nod to another Horror author of equal fame: Edward Lee.

For those who have read Keene before, you're probably already well aware of the shared underlining mythos that have, and continue too, pop up throughout almost all of Keene's novels and stories. Urban Gothic is no different. There's just enough of these mythos to give a treat to knowing readers, while not robbing new readers of their time and money. And Keene does anything but.

The abandoned house that Kerri and her friend seek shelter in, is a massive maze of interconnected rooms, and caverns that fill the basement. Keene takes this group of teens and puts them in a classic horror situation, but quickly turns it on it's head, with screams around every corner.

And as for the six friends, they're more than just your typical cannon fodder; character development is one of Keene's -- in my personal opinion -- best skills, and this book shows just how fast-paced, adrenaline pumping and unrelenting Keene can be. Around every turn of the labyrinthine like house, there's a scream and jolt that is a rare treat to find amongst even some of the best horror authors out there to date. Keene continuously puts these six friends into situations that I know for certain, I wouldn't have enough balls to get through, let alone stamina.

It's a gauntlet of a novel, and each page is stained with blood, gore and all around edge-of your seat fun and excitement. There were times were I caught myself screaming and laughing, and a few nights with little sleep -- not only from the page turning experience, but also from the sheer visceral awesomeness that pops out as you begin to become attached to the characters within the pages of Urban Gothic.

This might sound biased, but it would seem that no matter what Keene writes, it's always going to be a 7.5 on the rating scale. Yes, I'm a fanboy, and yes, I will gladly and willingly admit this, any day of the week. Urban Gothic is definitely at the top of my list of favorite Keene novels, which is why I'm going to give it 8.0 T.A.R.D.I.S.'s out of 10.

So, stop reading this and go pick up a copy. You can thank me after you've finished reading it and calmed down enough to actually sleep.