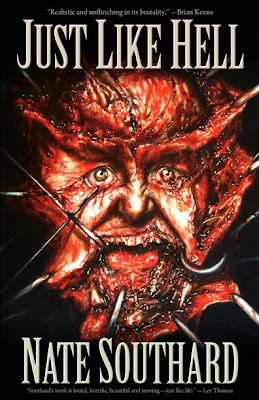 One of the handful of books that I've really been looking forward to reading this past year, I finally got the chance to read Nate Southard's modern hardcore horror classic, Just Like Hell. Originally published in August of '08 with Thunderstorm Books, and named Book of the Year by Brian Keene (also in '08), it's finally seeing mass release thanks to Deadite Press.

I had nothing but high hopes for Just Like Hell. And sure enough, it didn't dissapoint. This 122 page edition has more to offer than just the title novella; included is the title novella (Just Like Hell), and with four bonus short stories thrown in for good measure ("A Team-Building Exercise," "Miss Kenner and Me," "Senorita," and "Work Pit Four"). I love longer works from established authors, and I enjoy shorter works from newer writers, which made Just Like Hell a perfect little book for me to dive into.

Just Like Hell: The longest of the five stories, and the main piece of this collection, Southard proves why Just Like Hell has obtained the notable praise and mantle of modern horror classic. What started as gruesome amusement for Dillon's captors and football teammates, quickly turns into something far worse than any of them could have imagined. A silent night, in the woods, a cabin to themselves, Dillon and his boyfriend are subjected to his colleague's ire. As the night escelates, one thing is clear: there can only be one survivor. In an age of rage and hate for being 'different,' this isn't just fiction, it's a horrifying reality that many are too afraid to write.

A Team-Building Exercise: A short story that instantly starts off balls to the walls with no chance of slowing down until the final paragraph. 'A Team-Building Excercise' focuses on a group of co-workers who have to fight there way to the bottom of their building; from floor to floor there's something new for them to encounter, from Chuthulian type monsters, to ferocious woodland creatures. It all culminates at the end with a twist.

Miss Kenner and Me: As one part of his life comes to and end and another begins, newly gradauted Jacob must come to grips with the harsh reality that Miss Kenner his full time high school teacher and part time lover, no longer wishes for their fling to continue. Heart broken and unwilling to accept the truth, Jacob's life begins to spiral out of control as he tries to find a way to make Miss Kenner love him again.


Senorita: Told through first person POV, the main character of 'Senorita' finds a too-young lolita back behind a bar servicing a patron in a very inappropriate way, he decides to take matters into his own hands and rescues the girl, only to find that she's the property of a man named Abel. With only a shotgun and a few rounds of ammo, he breaks into her pimps apartment and from there the story goes from crime, to weird, ending with an almost Twilight Zone Twist.

Work Pit Four: The last and shortest piece of the collection is 'Work Pit Four,' a far future, dystopian post-apocalyptic yarn that finds a group of workers searching through a large pit of mud, for an uknown object. Along the way workmates begin to change, from oozing honey from every pore of their body, to slowly turning into stone, Southard casts a grim, unwanted future, that will send chills down your spine.

Overall, I loved this little book. Not only was the title story phenominal, but the added shorts at the end rounded it out well. It was a nice change of pace: each story ended differently, which helped to change it up. Although every story in this collection reads different, they are each a breath of fresh air; offering only a little of what I hope Southard has up his sleeve for future stories. That's why I'm giving Nate Southard's Just Like Hell 9 out of 10 TARDISes!