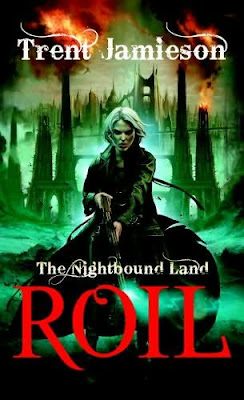 Shale is disappearing; the land is being devoured by the Roil, a sentient mass of heat, darkness and swarms of horrible creatures. Where once stood twelve major cities to fight back the engulfing Roil, now there are only four bastions of humanity that remain to fight. Including a drug-addicted boy, a man thousands of years old, and a young woman bent on avenging her parents deaths.

As the story begins -- hundreds of miles north of the Roil -- David Milde watches as his father bleeds out from a slit throat in the streets of his hometown. Forced into hiding he heads to the underground tunnels that worm beneath the city of Mirleess, all the while suffering from Carnival withdrawels (a type of drug). Soon after an old man named Cadell arrives to whisk David away, with Carnival aplenty, and a plan to save Shale.

Hundreds of miles away, nestled in the Roil, Margaret Penn discovers that her parents -- the geniuses credited for the still standing city of Tate -- are dead. Left with nothing, Margaret is forced to fight her way through the Roil into the areas of Shale that have yet to suffer from the heat. From there the story takes off, leaving the reader to ride the waves of excitement and confusion. Shortly after, the three saviors of Shale finally meet, the story plateaus and comfortably carries on well past the climax.

Opening each chapter Jamieson includes an excerpt from personal diaries, historical texts, or quotes that pertain  to the world of Shale. Their purpose is to add flavor, and somehow tie in to each chapter in their own way, enriching the story. Jamieson manages to do a remarkable job with this in the first handful of chapters, but after that they only add to the spiraling miasma that begins soon after these flavor texts lose their flavor. A clever idea, if executed throughout the full length of the novel, I still enjoyed reading each one, even if they didn't carry the story in that particular chapter.

Established early on that David is a addict of the drug Carnival, the addiction continues through the majority of the book, but is only mentioned in spots where it's important. Never is it actually portrayed that David has a true addiction, one where he's constantly trying to find his next fix, but rather it's used as a tool to fill space, or thrown in only to further the scene or plot. David's addiction is promemant within the first few chapters, but then slowly begins to dwindle off, until it is convenient to mention it.

Throw in a handful of ideas, -- that if executed properly would have added intense depth and a wider scope to the world created -- that didn't coalesce or gel in any form or fashion and left more questions at the end of the novel than resolutions.

However, as painful and confusing as it was to read, I still thought the premise of the story was a fresh allegorical take on global warming and how we humans have been and still are the catalyst for something that could very well be our downfall.

There's not much that really redeemed Roil for me, which means I probably won't be picking up the second book in the duology, Night's Engines, anytime soon. So, I'm giving Roil 4.5 out of 10 TARDISES.