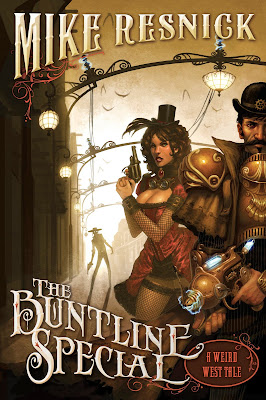 The Buntline Special is the first book in a (hopefully) new series by world-renowned Science Fiction author Mike Resnick.

As 2011 kicks off and The Year of Steam begins, I figured why not start it with a book that I've been wanting to read for a while? Thanks to Pyr Publishing, I'm able to review this unique title. Not only did Pyr send me a copy of Buntline Special, but three other steampunk books that I can't wait to sink my teeth in to.

The Buntline Special is one of those books that's, to be perfectly blunt: beautiful. Not only in the cover design, but also in it's concept. It's set in a Tombstone where horseless stagecoaches carry passengers to-and-from; electric lights illuminate the city's streets; bionic and cyborg women tend to men's needs at Big Nose Kate's bordello; and the law (and Doc Holliday) are donned in extremely hard brass plate body armor and gattling styled handguns. It's a wild west where magic can transform a man into a giant bat, and bring a gunfighter back from the dead for one last shootout.

The year is 1881. The United States Government is expanding westward, sending Thomas Ava Edison to Tuscon, Arizona. Along with Ned Buntline, Cyborg Edison is charged with combating the deadly magic of Indian Chief and Medicine Man Geronimo. To protect them, the U.S. Government orders the Earp brothers -- Wyatt, Virgil and Morgan -- to guard them. But the Earp's enterouge increases as Wyatt calls in a few favors from his close friends Bat Masterson and the infamous and notorious Doc Holliday.

But Geronimo's not the Earp's only worries. Along the way the five men will face The Clanton's, and their hired gun: The Thing That Was Once Johnny Ringo, culminating and ending soon after the shoot out at the O.K. Corral.

I grew up on westerns, whether it be reading them or watching them on television with my father. One of my favorite western movies of all times, is Tombstone with Kurt Russell, Val Kilmer and Sam Elliot. The shoot out at the O.K. Corral has always fascinated me in some capacity as well, so naturally, this was an obvious pick for me when I first saw it on the shelf.

There are so many things that I thought were astounding with this book: the weaving of the steampunk elements into the tapestry of the old west, and the history of not only the shoot out of the O.K. Corral, but also the history of the territory, and most importantly the city itself: Tuscon, Arizona. And I particularly loved the twist on Johnny Ringo: a philosophical, well educated shootist turned zombie, and a borderline vampyric Bat Masterson.

As much as I liked The Buntline Special, there were several things that immediately screamed at me upon finishing the book. The language was too contemporary, and the plot holes where large enough that a tank could have been driven through them. And the ending felt like it was slapped on only for future sequel possibilities. The steampunk is definitely there, and it's enough to give this weird western novel a twist, but unfortunately that's it.

Overall, The Buntline Special was a good read; one that I enjoyed, and I know I'll be coming back to, especially if there are future sequels. If you are looking for heavy hitting literature with a steampunk twist, you might want to pass on this one, but if you are looking for one hell of a time, this is your ticket! I'm giving The Buntline Special 7.5 Goggles out of 10.