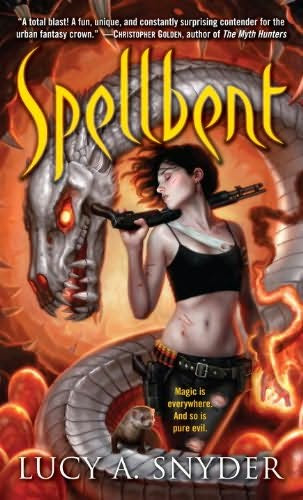 Spellbent is the ambitious, brilliant and funny debut novel of author Lucy A. Snyder.

Back in February I had the opportunity to meet Lucy, and her husband and fellow author Gary A. Braunbeck at a local signing in Indianapolis. I had previously only met them once before, back in '07 at Mo*Con II, and thoroughly enjoyed talking to them both and picking their brains on writing and the like. So, needless to say when I found out they were coming back to Indy again I knew I couldn't pass it up. And man, am I glad that I didn't. A fun night was had by all: Mr. Braunbeck read from one of his short stories, while Mrs. Snyder read an excerpt from Spellbent, and I walked away with more books that what I had walked into the store with, including a signed copy of Spellbent. Always nice.

I took it home and devoured it in about three sittings. It kept me spellbound from the very start, and continued to pull me in every time I tried to put it down. Snyder has a way of blending genres -- as most urban fantasy is all about -- and making the reader want more, and Spellbent has everything in it, including: Romance, Fantasy, Adventure, Horror and Mystery, with a good splash of humor thrown in. It reminded me a lot of Jim Butcher's The Dresden Files, in many ways, including the blending of genres and the epic scope that this seris could pan out to be, exceept Snyder doesn't take three books to get to the meat of the story.

Jessie Shimmer is a witch-in-training; an apprentice to her boyfriend Cooper, who's damn good at what he does. But while the two are casting a simple rain spell to help out the local farmers, things go haywire and Cooper disappears, leaving Jessie left with only her new ferret familiar, Pal. With no money, limited magic and a target on her back, Jessie takes it upon herself to find out what happened to her boyfriend and to set things straight, leaving destruction and death in her wake; she'll stop at nothing to find out what really happened to Cooper, and all I can say is: I WANT MORE!

Spellbent was one hell of a ride, something that caught me off guard. I didn't initially think it would be so fast paced and addictive, but Mrs. Snyder unlike many new authors, knows what she's doing, and I'm excited to see what she does with the second book in the trilogy, -- previously titled The Devil in Miss Shimmer -- Shotgun Sorceress. There are a handful or so of characters that are only met in passing, or for that matter mentioned, that I think would make badass characters, that I hope to see return, but only this time play a bigger role.

Over all, this debut novel is a first time experience that is well worth the read if you get the chance to pick it up. That's why I'm giving Spellbent by Lucy A. Snyder 9 TARDIS's out of 10. It's definitely going to be on the top of my list for 2010!

And if you get the chance, keep cecking back: in the next month or so I'll be doing a podcast interview with not only Lucy, but also with her husband, Gary, and I have a feeling it's going to be a good one!