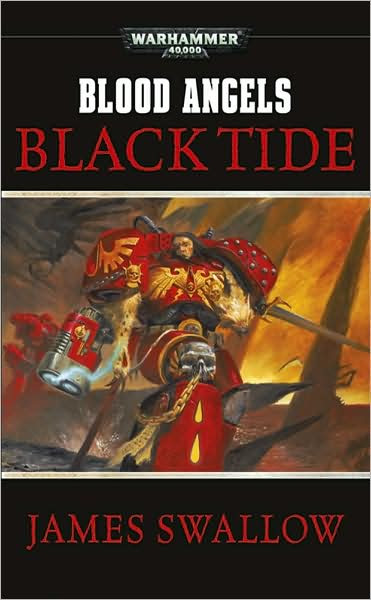 Title: Black Tide
Author: James Swallow
Publisher: Black Library
Pages: 416
ISBN: 9781844168057
Black Tide -- the fourth book in the Blood Angels series -- follows the events that take place in Red Fury. The Blood Angels home planet has finally been secured against the forces of Chaos, however, the mastermind behind the attack, Chaos Traitor Fabius Bile and the stolen vial of the Blood Angels dead Primarch's blood are still at large. The Chapters honor demands nothing less then the return of the vial, and hopefully the death of the traitor, before Fabius's unholy plans for the vial can come to full fruition. Tasked by Chapter Master Dante himself, rother Sergeant Rafen and his band of battle brothers must hunt down Fabius and return his chapters sacred relic, no matter the cost.
Black Tide is a novel full of action, driven by bolter fire and the roar of chainswords. Over four hundred pages of non-stop warfare, that will take the reader from an abandoned asteroid facility to a devoured planet full of ravenous beings hungry for the flesh of space marines. However, -- and this could be seen as the one shortcoming of the book -- no matter what manner of obstacle is thrown at the Blood Angels the conclusion of Black Tide is predictable. Even after Rafen is captured and thrown into Fabius's personal jail cell -- surrounded by the failed genetic experiments of the Traitor Apothecary -- the feeling of impending doom and lost hope is never definite; the idea of the characters not making it is never questioned. The genetically engineered space marines really do come across as invincible in this addition to the Warhammer universe.
While Swallow doesn't get you into the "mind" of a soldier, as do other Black Library authors, he does do an excellent job of bringing the full weight of over forty thousand years of Warhammer universe history into the story line. You really feel the burden weighing down on Rafens armored shoulders as he searches desperately for the eons old traitor in possession of his long dead Primarch's life-blood.
If your after a book that is driven by more then just action, Black Tide may not be the safest alley to travel. However, if non-stop action and blood spilling on every page is something to look forward too, then I highly recommend this addition to the Blood Angels series. Eight out of Ten Sonic Screwdrivers.
~Ryan
Posted by The Sci-Fi Guys at 2:42 AM