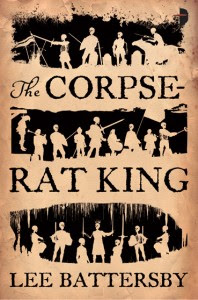 ﻿Angry Robot just recently revealed the new cover and synopsis for what will be a debut novel from author Lee Battersby. Titled The Corpse-Rat King, when AR first made the announcement that they had signed Battersby on, without even knowing what the book was about, I was all in. With a kick ass name like The Corpse-Rat King, how can you not be?

And once again, AR has put my uneasy feelings at rest with providing Mr. Battersby with a kick ass cover (but, then again, aren't all of Angry Robot's covers pretty B.A.?). It definitely has a medieval plague meets Dante's Inferno feel to it. And why shouldn't it, especially with a synopsis like this:

Marius dos Hellespont and his apprentice, Gerd, are professional looters of battlefields. When they stumble upon the King of Scorby and Gerd is killed, Marius is mistaken for the monarch by one of the dead soldiers and is transported down to the kingdom of the dead.

Just like the living citizens, the dead need a king -- after all, the King is God's representative, and someone needs to remind God where they are.

And so it comes to pass that Marius is banished to the surface with one message: if he wants to recover his life he must find the dead a King. Which he fully intends to do.

Just as soon as he stops running away.

With a release date of August 28th, I'm sure readers could start looking a few days before that for this awesome novel to hit the shelves of their local bookstore. And around the same time look for a review of The Corpse-Rat King.