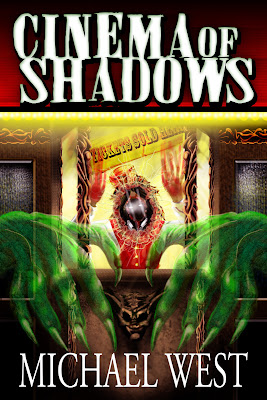 In less than six months, horror writer Michael West has returned with his sophomore novel Cinema of Shadows. After picking up a copy of West's debut novel The Wide Game and loving it, I couldn't resist checking out Cinema of Shadows, to see if it held up to his other works.

Tashima, Joss, Kevin and Kim are your typical college students, except for one thing: they've either seen, experienced, or are deeply interested in the paranormal. Which is why they're the four students Parapsychology Professor Geoffrey Burke picks to spearhead his newest investigation into the Woodfield Opera House-turned-Movie Palace. Throw in a love story, some beautifully written foreshadowing, a few old friends, exorcising of demons and a large explosion, and you've got one hell of a good story.

Although Cinema of Shadows  isn't a direct sequel to The Wide Game, it does take place in the same fictional town: Harmony, Indiana. So, it's won't be a surprise to the large majority of readers when a character from West's first novel pulls up a chair and stays awhile. This expanding of a town, like King's Castle Rock, is something that I thuroughly enjoy. Not only does it take you back to the same place time and again, but often times to the same characters, even if the main character only mentions them in passing.

West doesn't disappoint with Cinema of Shadows: he can still scare the hell out you without the blood and guts, or vulgarity that's typically associated with the Horror Genre these days. If anything, he's further shown that it's not all about zombies and werewolves, or god help us vampires, but about something more surreal and honest. And that kind of horror penetrates through every majorly charged scene throughout Cinema of Shadows.

And if that's not enough, West knocks it out of the park with the characters he's chosen to populate the pages with. He's managed to steer away from your typical whiny college student whose only looking for a good time. West has even managed to take a few overly done cliches and smash them out of the park, reassembling them into something that is unrecognizable.

I suggest grabbing the closest pile of blankets and a flashlight, because you'll be up way past your bedtime, hiding under the blankets, reading on while West effortlessly chills you to your very marrow. That's why I'm giving Cinema of Shadows 9 out of 10 TARDISes.

If you've already picked up Skull Full of Kisses, or The Wide Game, or for that matter are a Micheal West virgin, I highly recommend snagging a copy of Cinema of Shadows as soon as humanly possible. It's well worth the read! 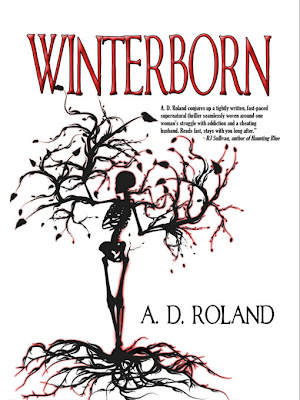 
Tamsyn Hallert is in a desperate fight to keep her life in control. She’s coping with an unfaithful husband, Sean, who’s obsessed with the memory of Sharla, a woman with whom he carried on long-term extra-marital affair. Sharla apparently killed herself in a bizarre cult ritual suicide on the infamous and haunted Wraithborne Estate located only a short drive from the Hallert home. And to make matters worse, Sean still cranes his neck at the living girls, too.

Add to that, Kevin, Sean and Sharla’s son, is an unwelcome new addition to their troubled family. Hidden from Sean until just before Sharla’s death, Kevin has made it his personal mission to make life for his new step-mom hell on Earth. Is it any wonder that Tam’s use of tranquilizers has grown into an addiction that now threatens to overwhelm her?

But Tam believes in her family, and she stands by her man and waits patiently for him to put his obsession with his dead lover behind him. She does her best to mother the evil ungrateful stepchild. But while Tam is supporting everyone around her, no one is supporting her, and her life spins rapidly out of control. Before long, the shadows are dissolving into scratching, cackling creatures chasing her through the house, the stepchild is openly threatening her (and demonstrating bizarre superhuman powers in the process), and it’s not long before the ghost of Sharla herself shows up to torment her. But are these really supernatural occurrences or hallucinations brought on by an ongoing psycho-tropic drug overdose? Can Tam save her marriage, her home, and herself?

Winterborn is a hefty novel, at 130,000 words, adding half again to the normal length of the typical action thriller. With this expanded lentgh, A.D. Roland expands upon her story, exploring the nuances of the cult that took Sharla’s life, the motivation of the nasty stepchild and the forces at work against him. Roland introduces a variety of nasty creatures, several secondary characters, each with their own dangling plotlines. Husband Sean spends time on the Wraithborne Estate grounds to explore the bizarre happenings there.

A.D. Roland demonstrates considerable ambition in Winterborn, and at times she falls a bit short of those ambitions, as if some aspects of the story grew too big for her. Plot points pop up for a time and are then dropped. At one point, the television transmits what amounts to a “supernatural documentary” to provide some backstory. Intriguing in the moment, the TV never repeats this magic trick.  Winterborn takes on issues no less challenging than spiritual strength in modern times, but doesn’t seem to reach any conclusions. (Then again, maybe that’s the point after all.)

Still, taken as a whole, A.D. Roland can be forgiven the occasional stumble when the overall effect is this much fun.  For its intimidating length, Roland conjures up a tightly written, fast paced supernatural thriller seamlessly woven around one woman’s struggle with addiction and a cheating husband. Winterborn reads fast and stays with you long after. I wholeheartedly recommend this ambitious supernatural thriller—especially to anyone who needs a break from their steady diet of zombies and vampires. 8 out of 10 TARDISes.