I've just been book bombed, thanks to Black Library! Here's what the contents of the package looked like:

Fingers crossed, I'll be able to squeeze in a few reviews of some of the titles mentioned above. 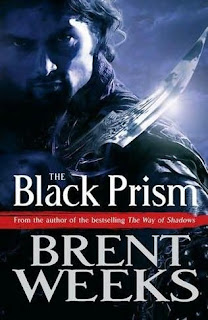 First up is Brent Weeks novel Black Prism, published through Orbit,  which will see an August 23rd release in paperback.

Here's the synopsis for Black Prism: Guile is the Prism, the most powerful man in the world. He is high priest and emperor, a man whose power, wit and charm are all that preserves a tenuous peace. Yet Prisms never last, and Guile knows exactly how long he has left to live.

When Guile discovers he has a son, born in a far kingdom after the war that put him in power, he must decide how much he's willing to pay to protect a secret that could tear his world apart.

And for those who have an interest in book trailers, you're in luck! Below is the book trailer for Black Prism, one of the most badass book trailers I've seen in recent years:


I'm happy to announce that I'll be doing a review for Black Prism here in the next few weeks. 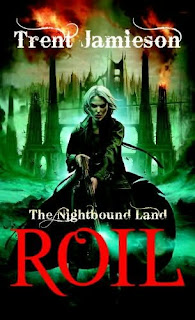 It seems as though the only thing Angry Robot Publishing has been capable of doing since letting their presence be known in speculative fiction, is finding authors with brilliant ideas and publishing them. They've managed to do it again with Trent Jamieson's Roil, book one of a two book series called The Nightbound Land. The release date for Roil is August 30th, when it'll be found on the shelves of your local book store.

Here's the gripping synopsis: Shale is dying. A vast, chaotic, monster-bearing storm known only as the Roil is expanding, consuming the land. The last humans are fighting back with ever more bizarre new machines, but the Roil seems unstoppable. Whole cities have been consumed -- where once there where twelve, only four remain.

It's up to a decadent wastrel, a four thousand year-old man, and a young woman bent on revenge, to try to save their city -- and the world.

I'll be posting a review for Roil soon. 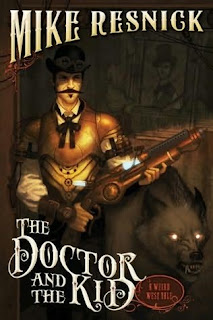 After reading Mike Resnick's The Buntline Special earlier this year and loving it for the most part, I've been keeping my ears to the ground, waiting for news of a sequel to it. And sure enough, pictures of the cover for The Doctor and the Kid finally popped up on the web, with a now updated release date of December 20th of this year.

There isn't much in the way for a synopsis or brief explanation for The Doctor and the Kid, thus far, except for this little nugget:

Doc Holliday needs to replenish his bankroll quickly and uses his skill as a shootist to turn bounty hunter. The biggest reward is for the death of Billy the Kid. Doc enlists the aid of both magic (Geronimo) and science (Thomas Edison). 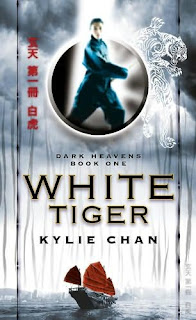 One of the more recent procurements for my collection is Kylie Chan's White Tiger from Harper Voyager. From what I can tell, White Tiger is Urban Fantasy with an Asian twist. I'm looking forward to reviewing it.

It's slated for release on August 30th. For those interested, here's the synopsis:

Emma Donahoe has just started her new job as nanny to Simone, the daughter of John Chin, a very rich Hong Kong businessman.

She understands that Simone may be a target for kidnappers but she does not expect to be drawn into a world of martial arts, magic and extreme danger, where gods and demons can exist in the mortal domain.

When John and his American bodyguard, Leo, teach Emma their particular style of martial arts, they realize that Emma herself is more than she seems. 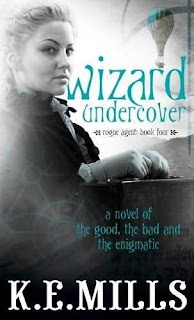 Here's another novel that I've been keeping my ear to the ground about. Originally it was slated for a September 27th release date according to Amazon.com only a month or so ago. Because of unfortunate health issues, K.E. Mills (Karen Miller) recently posted on her blog that Wizard Undercover, published through Orbit Publishing, has been pushed back until January of 2012.

So, expect reviews posted for both Witches Incorporated, the second book in the Rogue Agent series, and Wizard Squared, the third book in the series, before the end of this year.

And of course, here's the synopsis for Wizard Undercover:

There may be trouble ahead...

Wedding bells are ringing for the constantly battling nations of Splotze and Borovnik, and the upcoming royal nuptials could at last put an end to their dangerous hostilities. But in a development that hardly bodes well, one of Gerald's fellow janitors goes missing -- after delivering a dire warning of danger surrounding the marriage treaty. So Gerald must embark on a dangerous mission to uncover the troublemakers, before wedded bliss becomes international war.

But going undercover isn't as easy as it looks, even with Melissande and Emmerabiblia for camuoflage. Soon Gerald finds himself fighting for his life as well as world peace. 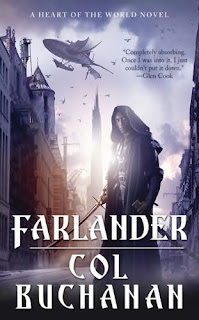 To round out this awesome update list, I figured I would mention the paperback release of Colin Buchanan's Farlander, published by Tor, which hits shelves on the 30th of August. I was excited about it when it first came out in hardcover, and I'm even more excited about it coming out in paperback, because now I can afford it, which means I'll be doing a review for it in the near future! For those interested, here's the back cover blurb:

The Heart of the World is a land in strife. For fifty years the Holy Empire of Mann, an empire and religion born from a nihilistic urban cult, has been conquering nation after nation. Their leader, Holy Matriarch Sasheen, ruthlessly maintains control through her diplomats, priests trained as subtle predators.

Ash is a member of an elite group of assassins, the Roshun, who offer protection through the threat of vendetta. Forced by his ailing health to take an apprentice, he chooses Nico, a young man living in the besieged city of Bar-Khos. At the time, Nico finds himself hungry, desperate, and alone in a city that finds itself teetering on the brink.

When the Holy Matriarch's son murders a woman under the protection of the Roshun, he forces the sect to seek his life in retribution. As Ash and his apprentice set out to fulfill the Roshun orders, their journey takes them into the heart of the conflict between the Empire and the Free Ports... into bloodshed and death.

There's the roundup for now! Look for more reviews soon!

A Blight of Mages Book Review 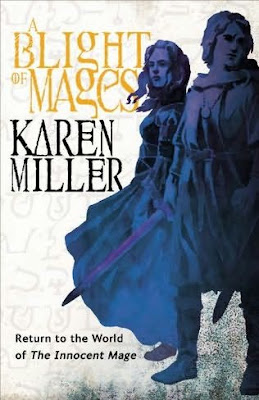 Dorana is a peaceful nation where magic runs through the blood of the people.

Barl Linden finds herself going against the Council of Mages, -- a group of the finest magic users in Dorana who vote and rule over the country's upper echelon of Mages. The Council chooses who may enter the mage schools of Dorana, and though an unspoken rule, limits education to only the strongest and most influential bloodlines of the nation, and the Linden bloodline prevents Barl from doing so.

With the Council comes some very interesting characters, including Morgan Danfey, a mage of the echelon of Dorana and the youngest mage to ever hold a seat on the Council of Mages. Through his ailing father's tyrannical power, Morgan is forced to search for a wife; a female to use only for the progress of the Danfey bloodline, name and influence.

Ignored by peers and loved ones alike, Morgan is forced to act while the rest of the country sits and waits unaware, studying the condemned and terrifying magic that has been hidden away to most of Dorana for centuries, to prevent the very fabric of Dorana from unraveling. And all the while he continues to search for a bride, and hold his seat with the Council.

When Barl Linden demands confrontation with the Council, Barl and Morgan Danfey meet for the first time, and something within them snaps; they recognize each other for what they truly are. And so begins their forbidden relationship. Brought to the forefront of Morgan's conspiracy, Barl begins to work endlessly to help her lover and mentor protect Dorana. And the question is raised: who does Dorana need protected from?

Although not the first book written in the series, A Blight of Mages is in fact the first book in the series. Written as a prequel to the Miller's duology Kingmaker, Kingbreaker, A Blight of Mages explains the story before the story. Luckily enough, this is my first Karen Miller novel, or 'Mage' novel. I've previously read  The Accidental Sorcerer -- more of an urban fantasy, even though it is set in another world -- written by K.E. Mills, a pen name of Miller, and thought it was fun.

But, like The Accidental Sorcerer, A Blight of Mages suffered from a few of the same problems. Namely: the pace, and the abruptness of the ending. Let me explain. It's not until well into three hundred pages that we meet Morgan and the Council. That's when things really get going. Everything before it sort of felt like filler, although a great in-depth character study, it just didn't gel too well with me. Regardless of whether or not a novel's full intent is to be one large character study or not, the story needs to begin immediately. And I didn't see it starting until well past page 200. On that same note, it would make sense however, that the Barl Linden's background be explored more. (For those that have read either Kingmaker or Kingbreaker, or both, you know why. Trying to stay as spoiler free as possible.)

It's definitely noticeable throughout the novel, where the story changes, and I found myself being taken aback several times. Miller does a wonderful job of twisting things just enough, especially once the reader has settled in and semi-gotten used to the situation at hand, which works in such a novel, especially since it has a larger page count. Even though it's a stand-alone prequel, I would love to see maybe more books set before Kingmaker, that go more in depth with the characters left at the end.

A Blight of Mages is vast in scope, and filled with memorable characters, and even some memorable quotes that will make you think, and possibly have you rethinking how you treat people.

Needless to say, I'm looking forward to reading the Mage series. Karen Miller has proved to be an author to keep on my radar, and I intend to do just that. That's why I'm giving A Blight of Mages 8.0 TARDIS's out of 10.