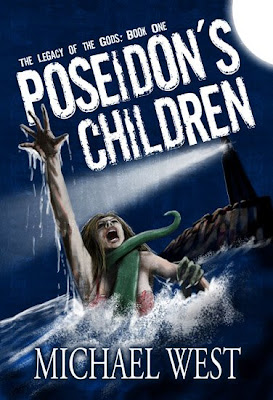 Much like the publishers that came before them, readers may not know how to classify Poseidon's Children at first glance. As Michael mentioned last month in his guest blog, "Bringing Poseidon's Children to Life"; without realizing it, he had found himself ahead of the publishing curve with a manuscript that would in today's market easily be labeled urban fantasy. An amalgamation of Leviathan sized nightmares written into 332 pages of hair raising, bone chilling, fist pumping action with a little bit of adventure thrown in for good measure, Poseidon's Children has the perfect blend of two popular genres: science fiction with overtones of horror.

And if you don't believe me, here's the synopsis from the back of the book:

In Poseidon's Children, man no longer worships the old gods; forgotten and forsaken, they have become nothing more than myth and legend. But all that is about to change. After the ruins of a vast, ancient civilization are discovered on the ocean floor, Coast Guard officers find a series of derelict ships drifting in the current–high-priced yachts and leaking fishing boats, all ransacked, splattered in blood, their crews missing and presumed dead.

And that’s just the beginning.

Vacationing artist Larry Neuhaus has just witnessed a gruesome shark attack, a young couple torn apart right before his eyes… at least, he thinks it was a shark. And when one of these victims turns out to be the only son of Roger Hays, the most powerful man in the country, things go from bad to worse. Now, to stop the carnage, Larry and his new-found friends must work together to unravel a mystery as old as time, and face an enemy as dark as the ocean depths.

In his first book in a projected four book series entitled The Legacy of the Gods, West manages to take Atlantian myths -- you know, from the fabled, ancient city of Atlantis -- and imbue them into an already great story, bringing a richer tapestry of world building to the urban fantasy genre. This is something that I've found to be absent in other urban fantasy series as of late. Where most urban fantasy authors are happy with writing the same thing with only marginal re-imaginings, West has breathed new life into a bloated, redundant genre, commanding it with a voice that cannot be ignored.

Although it's not West's first published work, at times Poseidon's Children reads very much like a first novel. Slow in parts and lacking time for character development (this only applies to a few specific main characters), West still manages to pull off juggling such a large cast of characters fairly well, something he manages to pull off fairly well, with only a few bumps along the journey. Hopefully the second installment, Hades' Disciples will give the characters who weren't given the time to mature as main characters the opportunity to do so.

Fast paced and in your face, there were several scenes that scared the living piss out of me and several more that made Poseidon's Children a memorable read for me; one that I'm not soon to forget. If you're looking for that subtle horror that West does so well, then be warned because there is nothing subtle about this novel! From the first gruesome "shark attack," readers will know exactly what they're dealing with as they delve into the deep with Poseidon's Children.


If John Carpenter wrote prose, his pen name would be Michael West. Poseidon's Children reads exactly like a Carpenter film in all the right places, which isn't much of a surprise since Poseidon's Children was originally conceived as a screenplay. West proves that he can flawlessly write vivid scenes with a director's eye, tactfully inserting all of the Hollywood hallmark scenes and expectations into prose, without pulling the reader away from the story; explosions, fascinating creatures, budding romances between protagonists, a cult of chuthulu-like worshippers seeded on earth from an alien identity, and a fabled city risen from the darkest depths of the earth. This novel makes for one hell of a read. That's why I'm giving Poseidon's Children 8.5 out of 10 TARDIS's.

If you're looking for an urban fantasy series that puts a new twist on urban fantasy, then Poseidon's Children should be your next read!