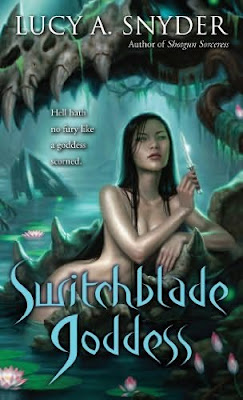 I have to be honest here: I've been waiting to read this book since the moment I shut the cover of Shotgun Sorceress. It didn't help that at Mo*Con last year, Lucy was awesome enough to read from Switchblade Goddess, so needless to say, it's been a painful year of waiting. But now, alas, the waiting is over.

I wasn't sure how to take the release of Switchblade Goddess. On one hand, I was excited to see what happened next, especially after the succulent morsel Mrs. Snyder read at Mo*Con, but on the other, I was reluctant to open to the first page. Because, no matter what, once I started reading there would be no turning back, and ultimately, when the book ended, so would the incredible story that Mrs. Snyder has managed to weave.

After much contemplating, I finally dug in. It was three hours before I finally decided to acknowledge the outside world, or for that matter, air to breath. The next night, I finished the book, much to my chagrin. It was everything I expected, and so much more. Let's just say there were a lot of tears and fist pumps along the way.

If Spellbent was dark, and Shotgun Sorceress was darker, then Switchblade Goddess is a nosedive straight into hell! Switchblade Goddess picks up right after Shotgun Sorceress, except now things have gone from worse to unfathomable. Jessie has to deal with Miko in her hellement, while the Warlock and Cooper (Jessie's lover) deal with one of Cooper's younger brothers. As the story dives closer and closer to hell, things begin to unravel and get worse for Jessie, including an exorcism-like ceremony, and the poisoning of one of the most enjoyable characters Snyder has created within Jessie's universe.

The main theme of Switchblade Goddess featured heavily on possession; fighting inhibitions and personal demons, and outside invaders to body and soul. Whether Snyder intentionally set out to do this or not, it worked remarkably well as a tool for tying up the majority of the loose ends that have popped up since Jessie's introduction in Spellbent. This has become a pet-peeve with me within recent years; not every author can manage to so elequantly tie up loose ends like Lucy can.

Snyder finds a way to successfully immerse the reader back into the world of Jesse Shimmer, picking up the trails and hell that she's gone through before, and the desperation of the situation that she finds herself in with Switchblade Goddess. With hardly any new major characters to introduce, Switchblade Goddess mainly sticks to resolving the older, and new stray storylines that pop up along the way to the series climactic ending.

As for the story as a whole, at times I cried, but for the most part I couldn't help but jump up and down in hysteria, waking everyone in the house with my squees of glee. If you've read this far in Jesse Shimmer's adventures, then you know what you're in for: a tight story, characters you love to hate, a special kind of magic that leaves you wanting more, and all the sexual tension you can handle without having to excuse yourself for some alone time. None of that lacks in Switchblade Goddess. In fact it's more prevalent than in any of the past tiltes. That's why I'm giving Switchblade Goddess 8.5 out of 10 TARDISes.