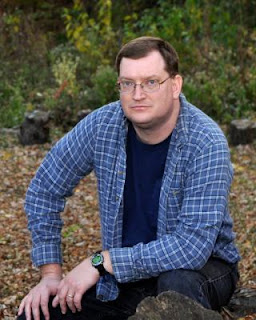 Congratulations to one of our very own Sci-Fi Guys, RJ Sullivan, for his new four book deal with Seventh Star Press! Labeled as a writer of Paranormal Thrillers, here's the full press release as per Seventh Star's site:

The addition of R.J. Sullivan comes close after Seventh Star Press' strongest year yet, during which titles such as Jackie Gamber's Redheart and Michael West's Cinema of Shadows received excellent critical reception, and the artwork featured by the press also received increased recognition, as Matthew Perry recently won Top Cover Art in the 2011 Tor.com Readers Choice Awards for his cover art on Stephen Zimmer's The Seventh Throne.

The first title to be released by Seventh Star Press, Haunting Obsession, tells the story of Daryl Beasley.  Daryl collects all things Maxine Marie, whose famous curves and fast lifestyle made her a Hollywood icon for decades after her tragic death. Daryl's girlfriend, Loretta Stevens, knew about his geeky lifestyle when they started dating, but she loves him, quirks and all.

Then one day Daryl chooses to buy a particularly tacky piece of memorabilia instead of Loretta's birthday present. Daryl ends up in the doghouse, not only with Loretta, but with Maxine Marie herself. The legendary blonde returns from the dead to give Daryl a piece of her mind—and a haunting obsession he'll never forget.

A member of the Indiana Horror Writers, R. J. Sullivan resides with his family in Heartland Crossing, Indiana. His first novel, Haunting Blue, is an edgy paranormal thriller about punk girl loner Fiona "Blue" Shaefer and her boyfriend Chip Farren.

"I was with Michael West at several events last year, and I couldn't help but notice the slick marketing materials he was handing out," R.J. Sullivan commented as to why he wanted to bring his work to Seventh Star Press.  "I saw how Seventh Star had a personal presence nearby to assist at the cons. I realized that having the publisher at those events changes the convention vibe, which can otherwise be an isolated experience. I love that they produce interior artwork as part of their product--it shows an understanding of the genre and its readers.  It's clear Seventh Star understand the modern publishing world, and does everything they can to open up opportunities for the author to succeed."

Bonnie Wasson, whose cover art and illustrations are featured in Seventh Star Press titles such as D.A. Adams' The Brotherhood of Dwarves series, will be creating the artwork for the R.J. Sullivan novels.

Haunting Obsession will be released in limited hardcover, softcover (trade paperback), and several eBook editions, including versions for Kindle, Nook, the iBookstore, and Sony-compatible devices.

For further information on R.J. Sullivan and the upcoming releases, please visit www.seventhstarpress.com or the author's site at www.rjsullivanfiction.com