A Pack of Wolves Book Review 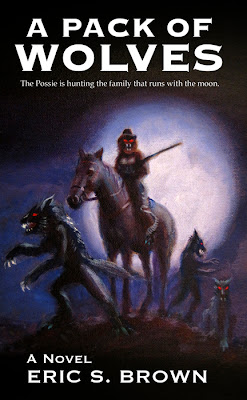 A Pack of Wolves is the first book in a new series by horror author Eric S. Brown. In a handful of years Eric S. Brown has gone from a nobody to a somebody, especially when it comes to Bigfoot or weird westerns that have a horror edge. With novella length titles like Bigfoot War, Bigfoot War II: Dead in the Woods, The Weaponer, Last Stand in a Dead Land, and How the West Went to Hell, Brown has managed to carve out not only his name, but a large section of territory in the horror genre.

A few days before A Pack of Wolves released, Brown posted on Facebook that he would be handing out a few electronic copies for review. Since an Eric S. Brown title was virgin territory for my hungry eyes, and because I wanted to see what all the fuss was about, I volunteered to review it.

A Pack of Wolves tells the story of "The Family." To say that the phrase: "A family that kills together, stays together," would be adequate in this family's case would be a lie. After one of the brothers decides to go rogue, it's up to the remaining family members to band together to stop him from bringing about the end of the world, exposing the family's secret, and acknowledging the existence of werewolves.

If you're looking for a story that leaves cliches at the door, you might want to look elsewhere. Before the story can even properly start, Brown manages to fill "The Family" full of cliches. There's Graham, the older, wiser brother who takes charge and reigns in his younger siblings to help stop their bloody thirsty brother. Then, there's Shannon, the outcast of the group, who has fallen in love with a human; an undesirable who he's managed to start a life with. And don't forget the added muscle, because there's nothing better than knowing a hulking behemoth of a man is watching your back. In case that's too much testosterone for you, let's not forget Sarah, the busty, drop-dead gorgeous redhead who is the eye candy for every male within a mile radius.

The story begins with the execution of the parents of "The Family" by a fourteen man posse with a man in white spearheading the group. From there the story begins. "The Family" assembles under the supervision of Graham, and the pack sets out to kill their kin or die trying.

At 132 pages, A Pack of Wolves is a quick read. Yes it's short, but it's worth it if you're looking for a quick, mindless read that you can get through in a matter of an hour or two.  With hardly any connective tissue, A Pack of Wolves reads as though Brown decided to only write the pivotal scenes, leaving out room for character development or for that matter, a better story. That's why I'm giving A Pack of Wolves 4 out of 10 TARDISes.