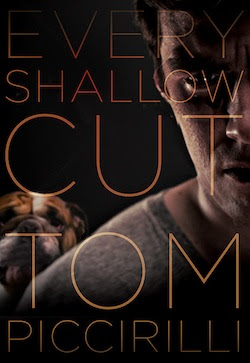 Truman Capote once said that: "Every word takes blood." I've only ever read a handful of novels that exemplify this statement, and Every Shallow Cut is one of them.

Every Shallow Cut is the short and realistically gritty story of a nameless unknown published author who has lost everything, including his writing career, his wife to another man, and his house to the troubled economy. He's got nothing to lose, and that can be a dangerous thing.

After getting jumped by a group of thugs on a Denver street, the nameless protagonist takes the few remaining possessions that belonged to his late parents and pawns them for a gun. He takes what's left: his car, and his bulldog, Churchill, and sets out on a road trip across the United States. His destination: New York, and ultimately the doorstep of his estranged brother.

But he and Churchill aren't alone. Ghosts of his past find a backseat and travel with him across the winding roads, bringing up the past as he tries to find the genesis for all the things that have gone wrong in his life. On this journey he will try to find meaning; a new place for himself as he battles with the backseat ghosts.

Considered a "noirella": a hybrid of a novella with a noir twist -- coined by Piccirilli himself -- Every Shallow Cut is so much more than noir. Although subtle, I enjoyed trying to find the hints of little noir nuggets strung throughout; very visible to the reader if one looks hard enough. But this novella doesn't stop at noir; it's so much more. It is at once a horrifying, raw, gritty, poetic, and a realistic memoir that will leave your head spinning once you've finished.

There is no doubt in my mind that Every Shallow Cut was a bloody cathartic release for Piccirilli, and it shows; bleeding emotion through on every page. This is Piccirilli at his best: one hell of a storyteller who knows how to make you laugh, cry, and hurt along with the characters. That's why I'm giving Every Shallow Cut 9.5 out of 10.

If you're looking for something that will make you think harder than your parents old dusty tomes of Melville or Tolstoy, then grab a copy of Every Shallow Cut. And when you're finished, lend it to all of your friends, and nag them until they read it.