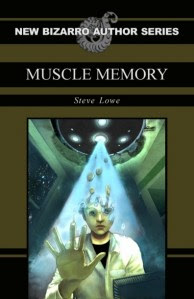 In short fiction, it takes a lot to find the right words, or for that matter the proper way to convey a story. Limitations help to prove the authors abilities, and quite honestly, short fiction is the determining factor for me when it comes to a new author. If they can successfully pull of a short story, novella, or novelette and leave me wandering, or thinking hard after finishing it, then they get my stamp of approval. And more times than not, I end up going back that authors stuff, in every capacity available.

Steve Lowe is now one of those authors. From the get-go, reading the synopsis for the novella, it just sounded awesome. In a world where it seems tropes are the common thing; overdone and horribly at that, it's nice to see an author able to take an old favorite and breath new life into it. Steve does this brilliantly in Muscle Memory, with the Ol' Switcheroo. Think Invasion of the Body Snatchers, Freaky Friday; Like Father, Like Son, and Vice-Versa, and then take those and flip 'em on their heads. Throw in a dash of government conspiracy, aliens, male breast feeding, and a talking sheep, and you've got Muscle Memory.

Here's the blurb from the back of the book:

Billy Gillespie wakes up one morning to discover his junk is gone. In its place is his wife's junk. Billy is now Tina, and Tina is dead. That's because Billy's dead. His lifeless body is still in bed and empty beer bottles and a container of antifreeze litter the kitchen counter. Over the next 24 hours, Billy and an odd assortment of neighbors, all experiencing their own bouts of body switcheroo, try to figure out what happened and why. Can they do it before the Feds find Billy's body? Was it aliens that caused this, or God, or the government? And did Edgar Winter really sleep with his sheep? Pro football Hall of Famer Terry Bradshaw has those answers in a story that asks, What Would Kirk Cameron Do?

When he's not pulling on your heartstrings, he's making you laugh your ass off. And he does a remarkable job of both with believable characters, and a populated town that took me back in time to my hometown; very recognizable people that just added a whole other layer of down-right hilarity to the mix.
Muscle Memory was well paced; I ended up reading it in just over an hour, and let me tell you, that was an hour well spent. The plot is interesting, the characters are hilarious, and the ending, well, the ending blew me out of the freaking water. Never would I have seen it coming. Through all of the seriousness and funny that covered the pages, what hit me the hardest out of it all was the ending. Very powerful stuff.
Two things should be mentioned: First, Muscle Memory is part of Eraserhead Press's New Bizarro Author Series; one of a handful of shorter Bizarro pieces by new Bizarro authors looking to be read. Two: All throughout the month of Febraury, Steve will be donating all of the money made through sales of Muscle Memory and his other book Wolves Dressed as Men, to a local Foster Care program which he and his wife are a part of. For more details, visit his site/blog www.steve-lowe.com.
Reading Muscle Memory was an experienced for me, and if Steve's other future works are as powerful as this little Bizarro piece was, then I'm definitely looking forward to whatever he manages to write up next. The man can write short fiction, which is why I'm giving Muscle Memory 9.0 out of 10 TARDIS's.
Although I received Muscle Memory as a review PDF, you can rest assured that I'll be picking up a couple of copies of both of Steve's books, not only because it's for a good cause, but because he's one hell of a writer. So if you've got a big heart like me, why not pick up a few copies of both? With Valentine's Day just around the corner, you could always get one for the lover in your life who happens to have a messed up sense of humor!
~Rodney
Posted by The Sci-Fi Guys at 5:57 AM