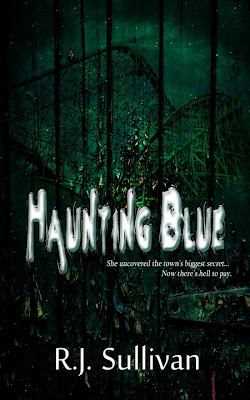 Where to begin with this novel?

It was so much more than I expected, in so many ways.

Haunting Blue is the story of Fiona, a goth chick from Indianapolis, who is forced to move to a small town in the northern part of Indiana, when her mother takes a new job. From the very beginning of the novel, the reader begins to learn about Fiona, and her life, as the newest chapter in her life unfolds. Immediately she's thrown into small town drama, that's right: high school. She quickly realizes what it's all about, making friends and enemies as she goes. Including Chip, a geek/nerd/dork who loves all things computer related. The two soon strike a friendship, until it turns in to something more serious. As the story progresses Chip explains to Fiona -- who Chip nicknames Blue (the name stuck) -- that there's buried treasure at the local theme park, and he wants her to help him.

While Blue's story is unfolding, Sullivan does a remarkable job with flashbacks, taking the reader all the way back to 1973, to when the buried treasure had been stolen, and the group of men involved with the armed robbery.

I found the storytelling in Huanting Blue to be surreal at times, and often frustrating, and here's why: with a title like Haunting Blue, I kept finding myself wondering when the haunting part was going to occur. It wasn't until the very last second, and the most unpredictable moment that it happened. It kept me on the edge of my seat, from there on out, until the last sentence was read.

I'd like to say that I knew what I was in for when I first picked up Haunting Blue. At times I thought I was reading a coming of age story, or a romance. At other times it felt like a thriller, or maybe it was a ghost story after all.... I'm still unsure.

If you're looking for a good read, pick up a copy for yourself or a loved one. That way you can argue with them after you've both finished it.

Because Haunting Blue kept me guessing on the edge of my seat, it's earned 8.5 out of 10 TARDIS's.