The Empire In Black and Gold Book Review 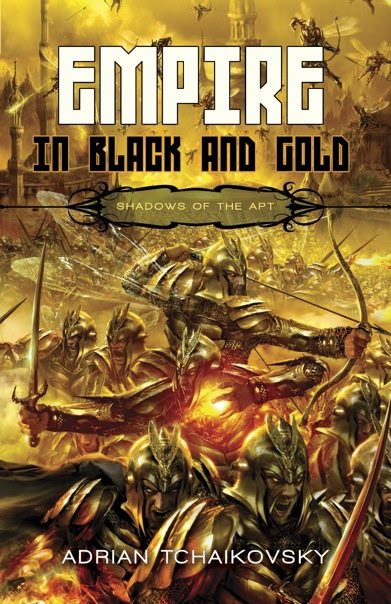 Empire in Black and Gold is the first novel in the "Shadows of the Apt" series by Adrian Tchaikovsky;a new and ambitious fantasy series published by Pyr.

The city-states of the Lowlands have only known peace for the past several decades. These great city-states are bastions of civilization protected by treaties, they share trade with their fellow neighbors.

But while the people of the Lowlands go about their comfortable lives, a tide of black and gold soldiers are consuming, demolishing and enslaving countries from afar, quickly making their way towards the smug and comfortable inhabitants of the Lowlands. Highly trained and born with the killing Art, these are the soldiers of the Wasp Empire.

As the tide spreads, and more countries are consumed, the leader of a once small band of truth speakers emerges once again to raise the warnings. He is Stenwold Maker: Beetle-Kinden, statesmen, artificer, spymaster and teacher. With a cadre of his best students, and a few friends from years past, he and his small band of rag-tag heroes are the only thing standing in the way of the Wasp Empire and the remaining countries that have not fallen under black and gold shadows.

Empire in Black and Gold is a brilliant read. For those looking for a different take on fantasy, this is what you've been looking for. And if you don't believe me, then you only have to look at the marvelous and beautiful cover that Pyr has given to this tome of a book. They seem to always be on the mark when it comes to their covers, and this one doesn't disappoint.

Tchaikovsky does a marvelous job with world building, and drawing the readers attention in from page one. From the various races, to their different cultures and beliefs, this world reads like an already established shared universe in that there's so much going on. But unlike some of the shared universes, there's only one mind behind Empire in Black and Gold: Tchaikovsky. His characters are real; hero and villain begin to blur the more the book progresses.

What I find truly remarkable about this series is the fact that Tchaikovsky has added elements of Steampunk into such a marvelous world. Doing so, hasn't taken anything away from the world that he's created, but in fact, I think it's only made it stronger and more unique.

Fight scenes are abound in this novel as well. Brilliantly described and easy to imagine, Tchaikovsky has a remarkable mind when it comes to writing such scenes. He has kick-ass characters that help to elevate the fight scenes, promising the reader more in the following books as tensions between characters build, and the Wasp Army continues to demolition all that stands in their way.

Although it felt slow in several parts, for the most part the story flowed smoothly, and kept me wanting to read more. And since it's his first novel, I'd have to say that overall this is a damn fine debut. That's why I'm giving Empire in Black and Gold 9.0 out of 10 TARDIS's.