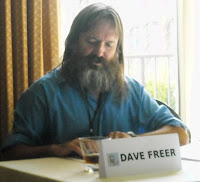 Dave Freer is an about to be Australian author (he's emigrating from South Africa) with a family and menagerie (indistinguishable in many ways) and the normal personal zone of chaos that follows him because it loves him and needs to show it cares. He is the author or co-author (with Mercedes Lackey and Eric Flint) of 10 novels, (with the 11th, DRAGON'S RING, due out in October). He also falls off cliffs (he's a rock climber) and nearly drowns himself (dives for spiny lobster) with monotonous regularity, which proves that really his books are written by his Old English Sheepdog, because no-one who is that repetitively dumb could write or even spell. Mind you, the spelling is suspect... Once upon a time he was an Ichthyologist, and he claims the strain of spelling that right unhinged his mind.

You can find out more about him, his move, his beasts and website and blogs at http://savethedragons.nu/ - his story-tellers bowl website to help raise money to move the menagerie!

g
Tasmarin is a place of dragons, a plane cut off from all other worlds, where dragons can be dragons and humans can be dinner. It's a place of islands, forests, mountains and wild oceans, filled with magical denizens. Fionn -- the black dragon -- calmly tells anyone who will listen that he's going to destroy the place. Of course he's a joker, a troublemaker and a dragon of no fixed abode. No one ever believes him. He's dead serious. Others strive to refresh the magics that built the place. To do so they need the combined magics of all the intelligent species, to renew the ancient mage, and dragons systematically eliminated those centuries ago. Their augury has revealed that there is one, and they seek her desperately. Unfortunately, she's fallen in with Fionn, who really doesn't want them to succeed. He has his own reasons and dark designs. The part he hadn't worked out is that she will affect his plans too. Chaos, roguery, heroism theft, love, kidnapping, magic and war follow. And more chaos.

And once again, because Baen Publishing is just so damn cool, they're offering the first nine chapters for your reading pleasure, for free. Dragon's Ring

And finally, for those of you who choose not to listen to the full interview, here's how The Sci-Fi Guys plan on helping Dave out: For each new member we receive on the site, we'll donate a dollar to Save The Dragons. . Each new member then, is added to a hat. When we get word from Dave that Save The Dragons is going to the printer, we'll draw names of the people who have joined the website, for a free chance to win a signed, personalized copy of the book in hardcover. If we reach 100 new members before the end of September, we'll donate another 25 dollars, and another chance for folks to win another signed copy of the book.

So, please join the site, and send us your names and e-mail adresses and we'll throw your names in the hat! E-mail us at: scifiguysbookreview@gmail.com
Enjoy!